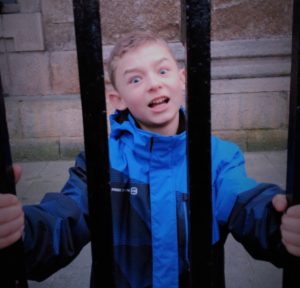 If you’re familiar with the story of Jesus’ crucifixion, then the name Barabbas is one you already know.  All four Gospels mention Barabbas, and his inclusion in Scripture seems incidental, happenstance.  But something struck me about Barabbas this week, and I wanted to share it with you.

In brief, Barabbas had previously been sentenced to death by the Roman authorities.  Matthew says he was a “notorious” prisoner (Matt. 25:16).  Mark and Luke say he was in prison with a group of murdering insurrectionists (Mark 15:7, Luke 23:19).  And John calls him a violent attacker or thief (John 18:40).  Where Barabbas enters the Biblical narrative, the Roman governor Pontius Pilate is asking the crowd whom he should set free from the prison, as was the custom at Passover.  Pilate expected the crowd would choose Jesus to be pardoned.  However, they surprised him and chose Barabbas instead.  By agreeing to their demands, Pilate ensured that the crucifixion of Jesus went forward.

Up until this year, I had never considered Barabbas himself.  Here was a man who stood condemned, with no hope of reprieve or pardon.  There is no doubt of his guilt, as all four Gospels spell it out very plainly.  Yet, instead of receiving the punishment he deserved, Someone else took his place at the cross.  Barabbas, at least in a physical sense, is perhaps the best example in the entire Bible of the saving work of Jesus.  Jesus stood in for him at the cross, despite never having committed a crime.  Jesus became the substitute that no one else could have been.  Barabbas was no less guilty at the end of Good Friday, but because of Jesus, he went free.  I realized something new this year.

The chief difference between the Barabbas of the Bible and me is that I can use the word “was”.  I was all of these things and more.  But because of the redeeming work of Jesus, I am made new.

“Therefore if anyone is in Christ, he is a new creature; the old things passed away; behold, new things have come.” – 2 Cor. 5:17
“But God, being rich in mercy, because of His great love with which He loved us, even when we were dead in our transgressions, made us alive together with Christ (by grace you have been saved)” – Eph. 2:4-5
“For if we have become united with Him in the likeness of His death, certainly we shall also be in the likeness of His resurrection, knowing this, that our old self was crucified with Him, in order that our body of sin might be done away with, so that we would no longer be slaves to sin; for he who has died is freed from sin.” – Romans 6:5-7
“for you have been born again, not of seed which is perishable but imperishable, that is, through the living and enduring word of God.” – 1 Peter 1:23

This Easter, let’s not overlook the fact that each and every one of us has the opportunity to be pardoned from an inescapable death sentence.  And, despite being born into an identity not unlike Barabbas, the power of Jesus makes us new.

Happy Easter!  He is risen!