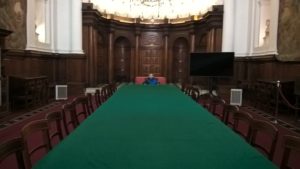 It’s a simple contradiction really.  In the course of our lives, we all come across areas that we would like to improve, to change, to fix.  But making significant, positive, lasting changes can be daunting.  Ask anyone who’s tried to quit smoking, to exercise, to eat better.  So while we like the idea of changing ourselves, there’s a price to be paid.  Nowhere is this more evident than in the flood of new year’s resolutions, easily made and easily discarded year after year.

We want our future selves to be great.  So how about we travel to the future?

Friends, I can take you to the future, one moment at a time.  Call it “realtime time travel”.  A year’s worth of change may not seem drastic in the moment, but we can see lots of changes as we look back.  It’s like growing up – adults always tell you that you’ve grown, but you don’t realize it until you do the honest work of objective comparison: trousers that have grown too short, marks on the wall that have fallen to eye level, high places that have sunk to within reach.

Still, although time brings about change, it doesn’t necessarily bring about greatness.  In fact, it seems that every area that improves with age brings along five or ten that get worse.  With this in mind, it quickly becomes clear that once a year is not nearly sufficient for making resolutions.  And, given the success rate of most of our resolutions, we see all the more that they are not enough for greatness either.  So how do we get there?  Some would say that struggle breeds greatness, but we know there’s not nearly as much greatness in the world as there is struggle.  Some say greatness comes from hard work, but again the ratio between hard work and greatness does not bear this out.  Google it and you’ll find hundreds of millions of paths to greatness, when in reality, there is just One.

Jesus said to him, “I am the way, and the truth, and the life; no one comes to the Father but through Me.
John 14:6

You want greatness?  Can’t get greater than God Himself.  And Jesus is the only way!

Brethren, I do not regard myself as having laid hold of it yet; but one thing I do: forgetting what lies behind and reaching forward to what lies ahead, I press on toward the goal for the prize of the upward call of God in Christ Jesus.
Philippians 3:13-14

So this year, let’s not sit back.  Let’s not waste time and energy on meaningless resolutions.  Let’s not try to bring about greatness in our own lives, but let’s rather approach the Source of greatness and see what He’ll do in us.  It’s 2018.  Keep looking ahead.