I’ve enjoyed woodworking for a while now.  As a small child, I would spend hours in my Grandpa’s shop, doing projects beside him.  As a teen, my Dad and I built things together, including a guitar I still play today.  In the intervening decades, I’ve built tables and chairs, even silly things like this shade for an alarm clock that was just too bright: 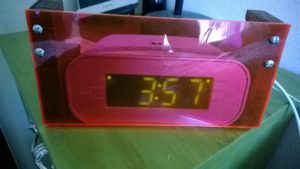 Now, I wouldn’t consider myself a master craftsman by any means, since much of what I know I learned by mistake – meaning I learned it without meaning to learn it, or I learned it after making a mistake.  Although those accidental lessons stay with you, they don’t always lend themselves to completeness or development of a particular technique or style.  Still, one lesson I have seen time and again is the power of sanding.

In the wood shop where I’m currently serving, we have a belt sander, which is a tool that uses a very coarse sanding belt to remove a lot of material at once.  We have an orbital sander, which isn’t as aggressive and doesn’t make use of paper as coarse.  And we also have various grades of sandpaper to be used by hand.  For a really involved sanding project, we’ll start with the belt sander to take care of the damaged and rough spots.  This does a lot of work, and the contrast from beginning to end is very noticeable.  See below for an example of this contrast: 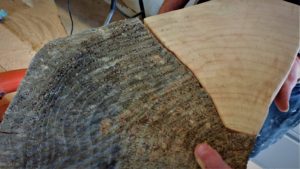 It’s a big improvement, of course.  But if you were to look closely at the “finished” product in that picture, you’d see a lot of marks left from the belt sander itself.  Because it is so coarse, it can’t really smooth the wood – it can just get below the jagged surfaces.  So then we’d pull out the orbital sander and go to work.  This work is less rewarding, because you really can’t see the same dramatic changes.  But after this process is complete, the surface is much smoother.  Finally, we’ll use even finer sandpaper by hand, barely removing anything, but taking out even the small marks left behind after the orbital sander.

And on it goes… each step removing less actual material, but getting the surface more and more like a finished product.  But you know what’s fun about it?  All the sanding and smoothing we do does not erase the character of the wood itself.  If anything, this refining process brings out the peculiarities, the uniqueness, and the identity of the wood being worked.  This is so true that even two identical designs, taken from the same plank of raw lumber, will look very different from one another.

I see so many parallels between this woodworking process and God’s work of sanctification in our lives.  There are big spots to rough out.  Small areas needing fine work.  And all the while we are being conformed more and more to the design of the One who is even now working on us.  But even though we are becoming more and more like Jesus in the process, we are not becoming facsimiles of one another!  Instead, our true character and identity is brought all the more to the surface – each of us a masterpiece of God’s making, each of us distinct and individual.

A word we see in Scripture is often translated “manifold”, and it speaks to this concept.  It has the idea of multicolored, multifaceted, like a patchwork of all kinds of different fabrics.  See below, quoting from the NASB:

“As each one has received a special gift, employ it in serving one another as good stewards of the manifold grace of God.” – 1 Peter 4:10

God’s grace, His wisdom, His gifts are not given on a one-size-fits-all basis.  Instead, the many shapes and colors, textures and finishes of a master artist are brought to bear as we are crafted – lovingly and beautifully – into the people He’s created us to be.  We will see different perspectives, have different reactions, and move in different ways to share His love in a world that needs it so desperately.

How is the manifold grace of God at work in you?