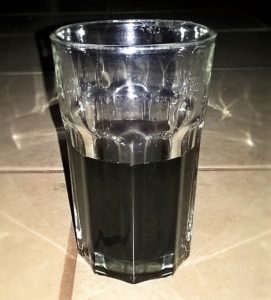 I’m such a pessimist.  If there’s something that can go wrong, I’m the first to think of it.  The first to assume it will happen.  If there’s a misunderstanding, I pretty much always assume it’s my fault.  The glass is not only half-empty; it’s also ridiculous to look at, lukewarm, and likely to spill all over the place.  Tell me I’ve done something well and I’ll disagree with you, even deep down.  It’s not false humility.  False humility is that annoying quality in people where they “know” they’re better than everyone else, but they know it’s not socially acceptable to say it.  But they’ve learned that if you put on the false humility, people might just shower even more praise on them overall.  Something like this:

That’s not me.  I just see all the negatives in brilliant detail, whether I pretend to have it all together or not.  It often comes in handy, as I can use my pessimism to anticipate problems and find ways over, around, or through them.  But I bet it’s pretty irritating to the optimism crowd.  Ask Dorine if that’s true.

Just because I’m a pessimist, though, it doesn’t mean I’m without hope.

Now, don’t look so surprised.  I may be negative and cynical and doubtful and yes even a pessimist, but hope is another matter altogether.  And it’s not just people like me who need hope!

Why do we need hope?  I’m reminded why every time a headline flashes on my smartphone.  Every time there’s a trending story.  Day by day, hour by hour, it’s not hard to see we’re living in a world that is broken, ruled by hate and division, fear and pain, loss and tragedy.  It’s not hard to look around and get the idea that maybe there’s good reason for pessimism.

…hope does not disappoint, because the love of God has been poured out within our hearts…

Pro tip: the love of God beats my pessimism.

There’s a difference between hoping and wishing.  I can wish all day long.  But when the Bible talks about “hope”, it means something more than just a wish.  Instead, it’s an inevitability that just hasn’t happened yet.  Something we’re looking ahead to see.  Just three verses prior to the one I quoted, Paul talks about the “hope of the glory of God”.  Paul isn’t saying he hopes God has glory!  He’s saying the glory of God, a certainty, is something we have to wait for.  It’s the same idea as in 1 Peter 1:13.

…fix your hope completely on the grace to be brought to you at the revelation of Jesus Christ.

Once again, the Bible isn’t saying that we are wishing for grace, but that it is a sure thing, to be revealed in full in the future.

Notice that the hope referenced in both of those verses is not baseless.  It’s not without an anchor.  It’s also not based in a political system, an ideology, a group, or even a great plan.  It is based on the Eternal and Almighty God, the One who does not change, the One who devised a plan of salvation for a world that needed it.  And, when I look around, I see clearly that we – that I – need it.  So no matter how negative my view or how pessimistic my outlook, I cling to the hope of a saving, redeeming, and faithful God.  Like it says in Hebrews 10:23 –

Let us hold fast the confession of our hope without wavering, for He who promised is faithful.

Where do you place your hope?