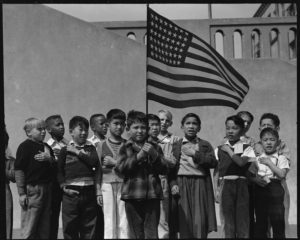 When I was a kid, one of the things we would do every morning in school was the Pledge of Allegiance.  (Unlike the photo, there were indeed 50 stars on the flag in my day, not 48.)  A classmate – either a teacher’s pet or someone who was selected as part of a rotation – would lead us in the Pledge, a task which can be accomplished in these three commands:

I must say, it’s been decades, but the words are impossible to forget: “I pledge allegiance to the flag of the United States of America and to the Republic for which it stands – one nation under God, indivisible, with liberty and justice for all.”  Nice words!  Looking at it as an adult, I can see the meaning.  I’m basically saying that I commit to being a loyal and dedicated citizen of the USA, which is itself a noble and divinely-appointed nation.  The practice of having kids recite this every morning in school should help to instill patriotism in the younger generation.

How has that worked out?  Well, Gen Xers like myself trend far lower in terms of national pride than our parents’ generation, despite this tradition that we had.  This may be because of a simple fact I can see even in my own life – I never gave any real thought to the words, even though I said them every day!

“Well of course,” you may say, “A little recitation isn’t going to make you more or less patriotic, even if you do say it every day!”  In response to that, I say, “How did you even get in here?”  And then, “Pardon the mess.”  But you do make a compelling argument.  Throwing around some nice words and phrases won’t necessarily make you feel or act any different.

Thing is, it’s true not only of patriotism, but of Christian faith as well.

It’s not the saying of words that makes one a follower of Jesus.  You can regurgitate great passages of Scripture, great prayers out of church history, great songs of the faith.  But if it doesn’t mean anything to you, you’re no better off than the nine-year-old who’s blindly mumbling the Pledge of Allegiance in Ms. Macias’ fourth-grade classroom.  I think of Jesus’ words to the religious leaders of His day:

“Woe to you, scribes and Pharisees, hypocrites! For you are like whitewashed tombs which on the outside appear beautiful, but inside they are full of dead men’s bones and all uncleanness.” – Matthew 23:27 [NASB]

Those are hard words!  But would He say the same about some religious folks today?  Would He see that, while they may have the appearance of adherence, it’s just a fresh coat of makeup on a corpse?  Are we just saying words, or are we letting the Word of God dwell richly in us (Colossians 3:16)?  Is the Word sitting on the outside, or has it made its way into our thinking, our attitudes, our being?

“For the word of God is living and active and sharper than any two-edged sword, and piercing as far as the division of soul and spirit, of both joints and marrow…” – Hebrews 4:12a [NASB]

Friends, the Christian life is not about ceremonies and practices.  It’s not about external adherence.  It’s about being changed from the inside out, completely and solely by the Gospel of Jesus.  Where do you stand?  Ritual or relationship?  Rote or real?  Death or life?