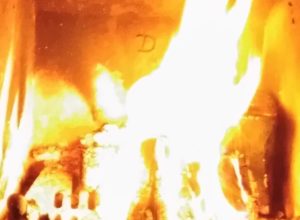 A number of years ago, I was involved in an industrial accident.  It was a flash flame, gone as soon as it erupted, but the damage was swift and undeniable.  In an instant, I had second-degree burns on my face and neck.  A trip to the clinic revealed no immediate threats to life, but we found just how close I had come to serious problems.  Singed nosehairs.  Burned eyelashes.  Still, with no organs threatened or compromised, the course of treatment became a simple process called debridement.  The word sounds unpleasant, but the act is even more so.  The nurse showed me how to do this as she began to work on my wounds with an abrasive pad.  With each scrape she performed, there was more pain than I had felt in the injury itself!  And this process was to be repeated without fail, once or twice a day, until the wound was healed.  So I spent days scraping away necrotic tissue in an effort to prevent infection, and I ultimately got through without even a scar.

The lesson is clear: play with fire and you’ll get burned.

How true this is in a metaphorical sense as well!  Sin is a destructive force in each of our lives.  We’re born into it.  In and of ourselves, it pervades our thinking, words, and actions.  The great hope of the Gospel is that the forgiveness offered through faith in Jesus is free and complete.  But even if we are free from the penalty and power of sin, it doesn’t follow that we are free of the after-effects.

Perhaps the best news about salvation is that it doesn’t require that we “fix” ourselves first.  God is faithful and will work out what needs to be worked out as we go.  But this news is not without a price.  It means that everyone – even the mature, growing, sincere Christian – is still a work in progress.  In other words, despite the fact that I have been a follower of Jesus for decades, I still have my struggles.  I still have my regrets.  And I still get burned by my own wrong choices.

It’s like that process of debridement.  Areas of my life may still be found that are dead.  Even though I’m whole, forgiven, and clean in my identity; my walk may not always reflect that.  And sometimes it takes a pretty heavy scouring pad to root out that dead tissue.  What a relief, however, that God is willing to work through these issues with me as they come up.  And even though the cure often feels worse than the ailment, God is good, not bringing me through in a cold and surgical way, but as a Father helping His child to walk.

Check out Philippians 1:6 [NASB], a familiar verse to many of us, but very timely:

For I am confident of this very thing, that He who began a good work in you will perfect it until the day of Christ Jesus.

So then, my beloved…work out your salvation with fear and trembling; for it is God who is at work in you, both to will and to work for His good pleasure.

God began the good work.  God will complete the good work.  And He is presently “at work” in me, scrubbing out the dead tissues in my walk so that I can walk as the new creation He has made me.

How is God bringing His work to completion in you?