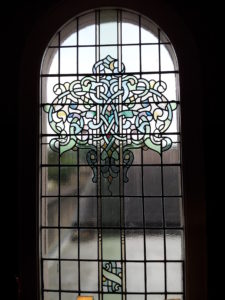 Last night, we had the first meeting of our newly-minted City Church West Side Community Group.  It’s a powerful thing to have Christians coming together for the purpose of praying together, opening the Bible together, and being in each other’s lives.  Reminds me of life in California, when we were leading a fellowship group at SVAC.  Once upon a time ago, that group was working through the book of First Peter, when we got to that passage… the one that has those dreaded words a lot of Christians today might want to edit out of the Bible altogether: “wives, be submissive to your own husbands…”

Oh, how I dreaded leading that discussion!  Could be seen as anti-woman.  Antiquated.  Outdated.  Out of place in the context of 21st-century western civilization.  As we were in the heart of the Silicon Valley, would the women of the group just get up and leave?  After all, this passage would seem to be setting back the idea of equal rights several hundred years.  As I prepared for the study, I found it wasn’t quite like that.

The context of the letter is unjust suffering.  So we can assume this is not just calling for wives to be subject to their husbands in a neutral-to-good marriage.  This is calling a wife to be subject to her husband, even if he’s a terrible husband.  Just seven verses prior to this passage, we read:

“For this finds favor, if for the sake of conscience toward God a person bears up under sorrows when suffering unjustly.”  1 Peter 2:19 [NASB]

And just in case you think the topics of husbands and wives is separate from that of unjust suffering, our passage begins with the phrase “In the same way…”  And the context immediately before is talking about how Jesus Himself suffered unjustly on the cross.  I think we’d be hard-pressed to come up with a stronger example of unjust suffering, and wives are called to suffer like Jesus.  This doesn’t just seem anti-feminist.  It seems inhuman.  Unreasonable.  Impossible.

Yes!  Now we’re getting it.

This is not a typical human response.  This is counter-cultural.  And it’s part of the central message the book is communicating.  First Peter doesn’t call us to seek out suffering – it tells us suffering will happen!  And our response to that suffering is to be different from that of the world.  Again, it seems unreasonable, inhuman, impossible.  Everyone has their breaking point, right?  Well, I think it all turns on these verses:

“For you have been called for this purpose, since Christ also suffered for you, leaving you an example for you to follow in His steps, who committed no sin, nor was any deceit found in His mouth; and while being reviled, He did not revile in return; while suffering, He uttered no threats, but kept entrusting Himself to Him who judges righteously…”  1 Peter 2:21-23 [NASB]

When I have traditionally thought about Jesus suffering, my assumptions have run along the lines of Him being God incarnate, having all the resources of Deity in Himself, and therefore able to meet anything with unflagging endurance.  But this passage puts it in a different light.  It says “while being reviled, He… kept entrusting Himself to Him who judges righteously.”  That’s something I can do!  I can rely on the presence and sufficiency of God in my own life and get through all sorts of bad situations.  These include relationships with Christians, with non-Christians, with government, with employers, with my own temptations, and in marriage.

I’ll tell you a secret.  I would generally consider myself a good husband.  But there are times!  Over the course of 18 years of marriage, I’ve let Dorine down in small things and in big things.  I’ve been thoughtless, careless, unfeeling – really awful at times.  But if you ask her, she would not tell you that this passage has made her feel trapped or downtrodden.  Rather, this idea of being able to entrust herself to God and find that He is enough, even when I’m not the husband I should be, has been freeing.

There’s a lot in this passage, but looking at it reveals some great truths about how God loves.  Far from treating women as second-class citizens, it points to a strength of character that I don’t find anywhere else in the Bible, and certainly not when talking about men.  And to be sure this is not just picking on the ladies here, the last verse of the passage starts with, “You husbands, in the same way…“, meaning the same responsibilities to put even a disappointing spouse ahead of oneself apply to husbands as well.  Putting the other person’s good ahead of ourselves, even if it is not what we would choose, looks a bit like what Jesus did for us on the cross.

It’s what the Bible would call “love”.